To those of you who are fortunate enough not to know what that is, it stands for ‘High Yield Investment Program’, a magic website/organization which will provide you with an endless, life-long cash flow in exchange for only a small deposit of your capital.

The term could be used in conjunction, or as a synonym for ‘’Ponzi-scheme’’, an empty facade presented to the public as a brilliant financial plan to get rich easily. It is a type of program that is run typically by unlicensed individuals. Though mentioned extensively in the literature (Mainly Dickens Martin Chuzzlewit and Little Dorrit, the first one to become famous for implementing this technique in real life is, surprisingly enough, Charles Ponzi.

Charles offered investors to participate in his master-plan of arbitrage of international reply coupons for postage stamps, which was evidently no more than a facade for using investors’ money to pay himself, as well as early investors.

These scammers can also use banks as part of their plan since they can pretend to represent the prime bank and give additional “safety” for the investment. This is just the facade of the plan since in reality, they are not involved with any such institution.

As I am writing this story, the dim sound of my A4 ‘’Dominotor’’ miner accompanies me from my porch outside of my home office, so you can say I’m biased. Personally, I prefer the term ‘experienced’.

So, as you all may know, hundreds if not thousands of different HYIP ‘businesses’ pop up every week, just like mushrooms after the rain. The poisonous kind. There is one question that can save you lots of funds in life, and direct you to the few correct digital investments that are still out there.

HYIP scams are very present in the technology especially as we move forward with advancement at a speedy pace that is hard to keep track of.

You can notice that this kind of program offers an unreasonable return for Bitcoin in order to attract people, and add potential investors. Once you are hooked on it, the website or contact person disappears with the money you invested.

How to avoid being a victim

If they have thought of a brilliant way to make money, what do they need you for?

The answer then will become evident.

Unfortunately, not everybody is blessed with critical thinking, and some people still take the bait, enough to feed this growing industry of glorified theft. Another unfortunate truth about this ‘business’ is that they typically use cryptocurrency funding to receive funds from their victims and thus affect the reputation of cryptocurrencies unfavorably.

Each one of those questionable ventures has more or less the same properties:

1. A website promising huge daily returns for life, without you ever having to do anything except depositing some money.

2. A somewhat reliable cover story AKA business strategy. For example, recycling for recyclix or industrial electricity trading for the retired ‘coince’.

3. A Great Britain registered Limited company (LTD), that can be obtained easily by a variety of service providers for as low as £20. It’s worth mentioning that no identification is required for most incorporations, and that a legal office location and a nominee local director will cost a couple of dozen more pounds, but that’s it. Typically the incorporation certificate will be proudly hanging on the front page of the website.

4. A ‘verified’ EV (extended validation) ‘green-block’ SSL certificate, similar to the one you will find on the websites of banks and other financial institutions.

5. It will always close down the moment it will stop growing. This period can vary anywhere from several days, through several months, to several years.

Aside from the several other red lights that already lit up during the past few paragraphs, there is essentially one main problem with the HYIP model:

It is a debate similar to the one raised numerous times along history by philosophers of various streams, as a tool of empirically determining the morality of one matter or another.

What would if everyone would do so?

Whilst not all online MLM, Pyramid, and cloud-mining offers are scams, they all share the same basic issues.

What are the alternatives?

Buy risk, or more specifically your own ASIC(Algorithm Specific Integrated Chip). It is a form of a chip that is designed to conduct a certain task using a combination of Analog circuits and Digital Block usually for the sole purpose of mining.

As we established well enough at this point, there is no money on the floor, and the only way to make money is to venture to take the risk of loss, for the chance of possible profits. Purchase your own miner, have control over your own hardware, control where you send your hashing power, and which coin you mine.

Cloud mining is the form of producing blockchain-based cryptocurrencies where the process of transaction is verified and added to the public ledger. Cloud mining and mining, in general, represents one of the fastest-growing trends due to the features and control that customer has.

The entire process is based on the ability of investors to perform operations without expensive hardware which makes it seem like an extremely lucrative procedure. Additionally, it is beneficial for any individual who seeks to invest in the mining of both altcoins and Bitcoins.

Yes, some will say it is a waste of electricity, but in fact, it is the very activity that secures the blockchain of any coin, and the very essence of allowing transactions to take place, and thus, it is value-creating.

Below is the profitability chard of my A4 terminator (1 unit out of 2) that cost me $1250 including shipping and taxes back in December, and was making since then 1–0.5 LTC. 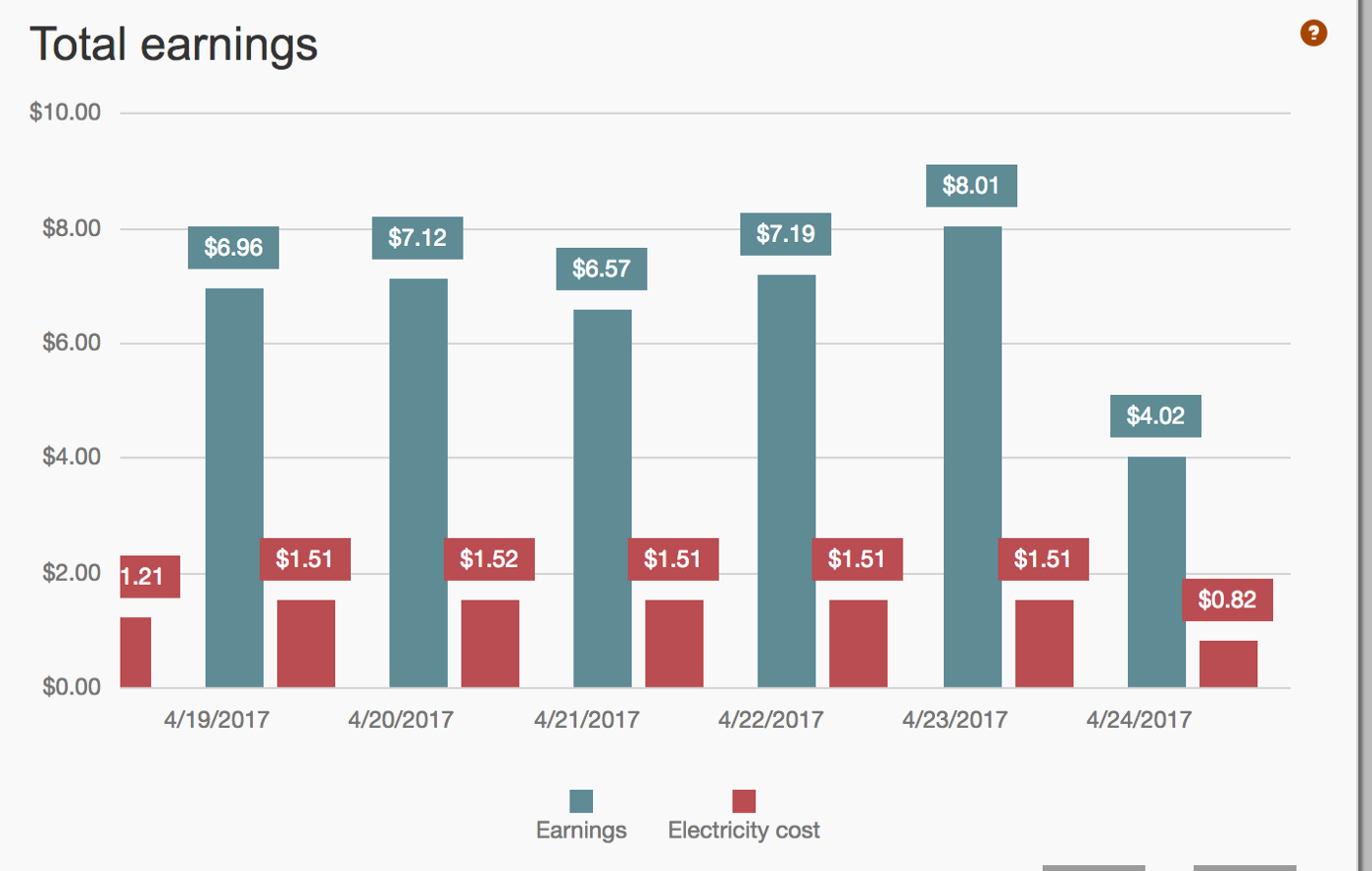 Of course, cryptocurrency price may vary, difficulty can grow, but this is the risk you must venture to take, and frankly, it is probably your best shot at this industry.

Lately, Bitamin introduced a new chip called L3+, which is not currently in stock for purchase.

However, it is my suspicion that some of those units started conduction PoW (proof of work mining), since both mining difficulty and network hash rate rose over 20% between April 19 through April 21.

With that being said, the current ASICs are already at the 14nm silicon technology, and a further leap to 10nm chips(accompanied by another major difficulty increase) would probably take several years. So now is a good time to enter this world, like any other.

More importantly, this happens at your home (or office / warehouse) network, at your full and exclusive control, and does good for the cryptocurrency community and the sustainability of the network. On a side note, the larger part of my personal profit from crypto-currency lies in simply holding it, rather than mining and selling it. If you are looking for a possible investment perspective without the hassle and the noise, it might make more sense to buy some cryptocurrency and hold on to it (buy-and-hold).

Lastly, concerns arise when identifying reliable and non-reliable sources. There is plenty of fake services that are based on a scam. One other form of scam using Pump and Dump schemes is where a group of scammers buys a new altcoin aiming to enhance the price and sell it later higher than the actual value.

Before dealing with the difference in the mining process between real Bitcoin and altcoin, it is important to distinguish what is Bitcoin and what is altcoin. Namely, the altcoin is the term used for any form of digital currency that is not Bitcoins. Some of the altcoins are Dogecoin, Litecoin, and Peercoin.

Some of the altcoins have been built to represent better versions of Bitcoin but in essence, they kept almost the same feature. Unlike them, there are separate coins that do not rely on open-source protocols as Bitcoin does and they have formed separate systems. Some of them are Ethereum, Ripple, and Nxt.

As you know cryptocurrencies are usually obtained by the mining process. There are several types of mining among which cloud mining is one that is most commonly used due to its budget-friendly features.

Cloud mining also has different procedures depending on the type of currency you seek to mind. A hosted cloud mining is a very popular model. It requires minor hardware for the operation but offers full control over the process. This model is often the choice of those individuals who seek to obtain Bitcoins or its sister cryptocurrencies.

Lashed hash power is another form of cloud mining where computing power is tied to the cryptocurrency and leased from the mining farm, so you are required to share profit but this form of mining is usually used for altcoins.

I will conclude with yet another quote:

“Wall Street makes its money on activity, you make your money on inactivity”- who else, if not Warren Buffet

On the next article in the series, I will cover the difference between various hashing algorithms, their corresponding types of hardware, and various techniques to make your mining more profitable (multi-mining, merge mining).

Our company, Exchange offers cryptocurrency exchange services, as well as rea miners, shipped to you from mainland Europen immediately once payment is cleared and without the hassle of dealing with customs.

It is also possible to acquire a hosting contract for your physical miner (with full access & control including SSH and control panel) and leverage our discounted electricity rate and a team of experts.